Tenants spend £1.9 billion less in rent than previous year, which is the first time this figure has fallen in more than 10 years 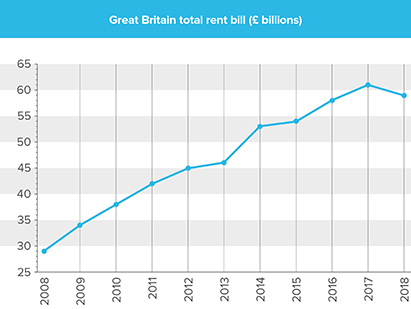 Last year private tenants in Great Britain paid £59.1 billion on rent, £1.9 billion less than in 2017. This is the first annual fall in over 10 years (table 1). The fall has been driven by a drop in the number of households renting and rental growth stagnating. However, over the last 10 years the total rent bill has increased by £29.9 billion in Great Britain. During this period the number of households privately renting has grown by 1.7 million (+52%), meanwhile rents have increased by 12.4%.

The full rental index report compares the change in rental growth / decline across the most recent year vs the last ten years, broken down by region, showing that the rental value of new lets has declined in the south of the UK, with growth achieved in all other areas.

FOR THE FULL REPORT AND ANALYSIS, PLEASE CLICK HERE >>

Research: Affordability To Buy Improves Across Some Regions